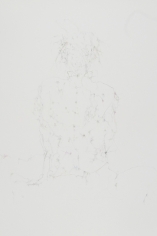 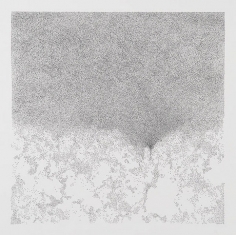 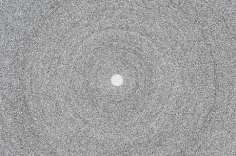 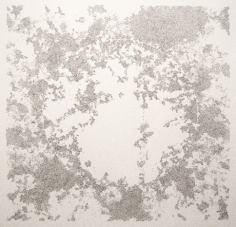 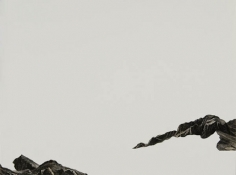 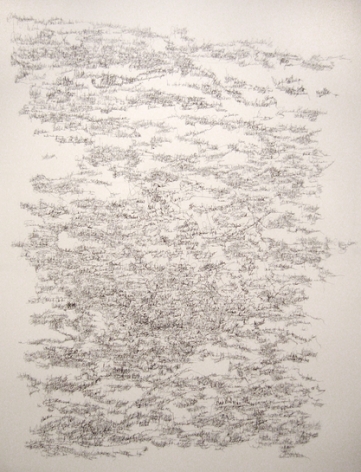 Foley Gallery is pleased to announce an exhibition of new works on paper by New York artist Alice Attie. The exhibition, Again and Again and Again, will feature works in ink, colored pencil and collage.  This will be her second solo exhibition at the gallery.

Alice Attie continues to re-consider, redress and rewrite the formalities of language. In Attie’s past exhibition at Foley Gallery, Mother Tongue, many of the drawings were generated by the texts of our history’s literary master works. Attie’s new group of text drawings become ever more abstracted; often a single word or phrase is re-iterated with miniscule inscription, allowing the accumulation of words to become something wholly other in its evolved form. Composed either of countless tiny words, letters or numbers that coagulate, Attie’s drawings often investigate the shared terrain of writing and drawing where fine lines mark a collaboration between the imagination and the intellect.

Dante’s Inferno, scrawled in its entirety on a single page, highlights, as Attie often does, the challenge of discerning what we can or cannot decipher, what is legible and what remains mysterious to us.

The colored pencil drawings are drawn with a lightness of touch that only barely allows the suggested figures to emerge. Attie seems to trace the very gesture of the hand as it draws. The visual field becomes one of quiet contest, where the corporeal and incorporeal nudge each other on; although these marks are subtle, Attie always imparts them with discernable presence.

Attie’s elegiac collages are built from late nineteenth-century Baedeker travel maps of glaciers that are receding, in actuality, and on the page where they are re-imagined.

Writing about the process of drawing, Attie observes that “…lines, as investigatory gestures, often pull us, as Victor Hugo said ‘towards the infinite,’ towards something that seems to tremble, as if the shimmer of the mind were passing through the hand. This is the force that seems to guide and urge the pulse of drawing.”

Alice Attie holds a master’s degree in Poetry and a doctoral degree in Comparative Literature. Her work has been widely collected, exhibited and published. Her drawings and photographs have been included in the collections of The Whitney Museum of American Art, The Jewish Museum, The Studio Museum of Harlem and The Santa Barbara Museum of Art. Alice resides and continues to work in New York City.