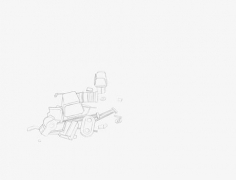 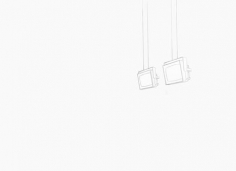 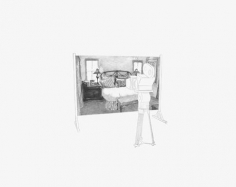 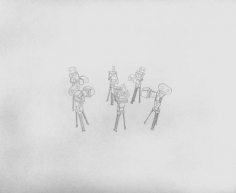 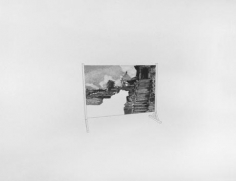 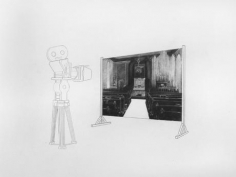 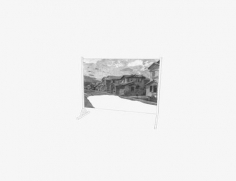 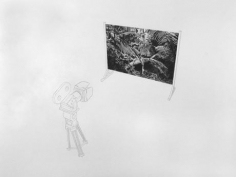 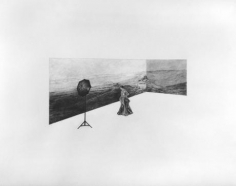 Foley Gallery is pleased to announce Backdrops and Cameras, an exhibition of new drawings by Texas born artist Richard Anthony Martinez. These delicately scaled graphite on paper drawings examine the complex relationship between constructed image and narrative.  Martinez uses the motion picture process known as the Matte Painting as his subject.

The Matte Painting technique was developed in the early years of cinema as a cost effective method of creating landscapes, cityscapes and architecture in the form of a painting that would later be inserted as a backdrop in the film that actors could then be superimposed into, creating the illusion of action within a still location and context.

In the eight drawings presented, archetypal images provide a fabricated context in the form of different landscapes and interiors filmed before a 35mm motion picture camera.  The contextual images in the drawings are rendered (like traditional Matte Paintings) as realistic and naturalistic environments, while the surrounding film equipment is executed with a contrasting linear or diagrammatic aesthetic.

The intention behind the appropriation of these specific images and filmic devices is to explore the complex relationship between fabricated/constructed images and narratives, the physical/emotional resonance that surrounds them and the cultural archetypes posited into them by an audience.  An image of a jungle or church remains largely ambiguous as a stand-alone image, but once it is put before a camera, there is a tendency to search for or construct a narrative, waiting for the scene to unfold, drawing an emotional resonance.  The film camera then, in these drawings, is not only a device used for recording and manipulation, but also, through it’s anthropomorphic qualities, becomes an audience member in and of itself.

Richard Anthony Martinez received his MFA degree from Cornell University in 2004 and his BFA from the Rhode Island School of Design in 2002.  He currently resides in Texas.