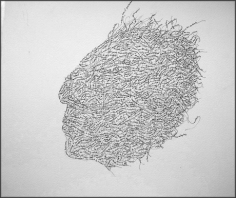 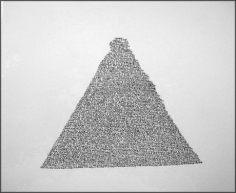 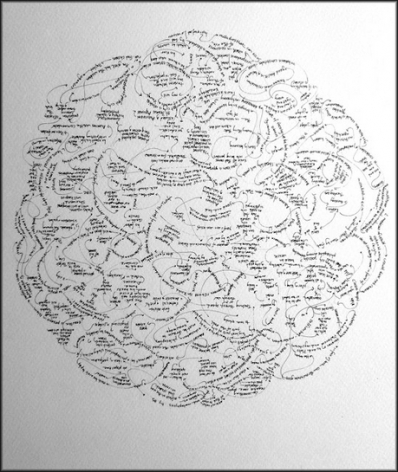 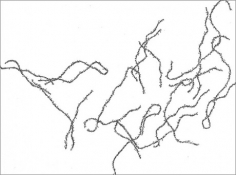 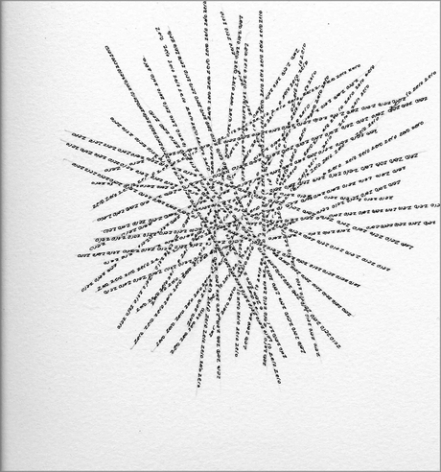 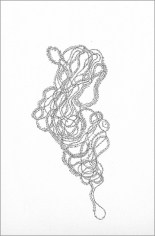 Foley Gallery is pleased to announce our third solo exhibition of drawings by Alice Attie.

Alice Attie has attended seminars in physics and philosophy at Columbia University for a period of several years.  Class Notes is a series of drawings, each of which was created within the time frame of a single class period. Taking notes in class, Attie re-inscribes the lectures as drawings; they became visual analogues to the intellectual adventures that Attie finds herself drawn to. The tenuous distinction between drawing and writing is invoked, and as the lines of these two merge and collaborate, they seem to stand for something entirely other.

Attie’s interest in the theories and concepts of advanced physics, for instance, is not distinct from her curiosity about the mathematical ciphers themselves; their strange ineluctable beauty suggests, but never explicates, their meaning.  While any language may be inaccessible on one level, it may be captivating and inspiring as it is re-figured and embraced on another.

Philosophy lectures, on Hegel, Kant, Nietzsche, Heidegger, and the Philosophy of Islam also inspire work that marks and often embodies some of the very dilemmas that philosophy addresses.  There is a play between the tangible and the intangible, the physical and the metaphysical, the miniscule and the grand. The tangling and untangling of strands, moving between what is legible and what is illegible, are what enthralls Attie.  As she engages that tension, the drawings become wondrous explorations of ambiguity and interpretive possibility.

Class Notes invites a sense of continuity and expansiveness that meets at the intersection of the aesthetic, intellectual, and theoretical.

Alice Attie holds a M.F.A. in Poetry and a Ph.D. in Comparative Literature.  Her work has been widely collected, exhibited and published. Her drawings and photographs have been included in the collections of The Whitney Museum of American Art, The Jewish Museum, The Studio Museum of Harlem and The Santa Barbara Museum of Art.  Alice resides and continues to work in New York City.

The exhibition will remain on view until November 5, 2011. Foley Gallery is open Tuesday - Saturday 11AM - 6PM.  For more information or to request images, please contact the gallery at 212.244.9081 or via email at info@foleygallery.com.