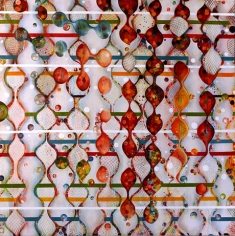 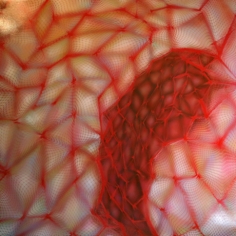 Michelle Hinebrook’s paintings explore the relationship between forms of the human body and geometric patterns associated with technology.

Moving between traditional studio practices and new media devices Hinebrook uses both digital processes and traditional painting tools to create her large abstract paintings. With the aid of imaging and scanning technologies Hinebrook maps the invisible interiors of the human body and contrasts them with polyhedral geometric shapes to create intricate and intersecting patterns. These new spatial structures are composed of warping grids over undulating organic surfaces that seem to both breathe and contract simultaneously.

Hinebrook’s line work is both hard-edged and painterly. Influenced by architecture, macro-microscopic pattern structures found in data and nature, computer graphics, cartography, and schematics these paintings are both structural and bodily portraits.

Michelle Hinebrook lives and works in Brooklyn, New York.  She has been included in numerous group and solo exhibitions throughout the United States and internationally. In 2005, Hinebrook graduated with an M.F.A. in Painting from Cranbrook Academy of Art.  Accompanying this exhibition will be a catalogue of recent works.