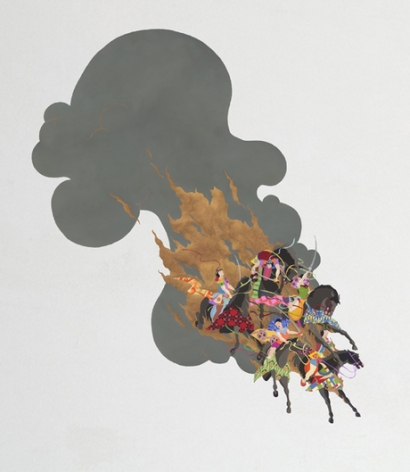 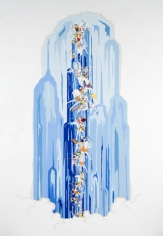 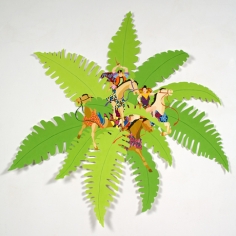 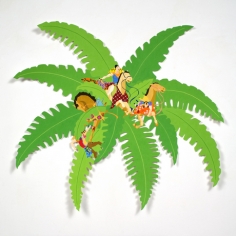 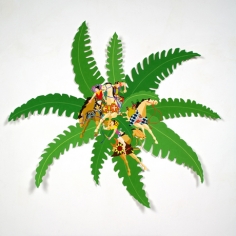 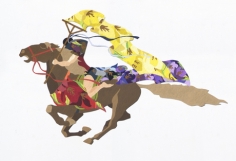 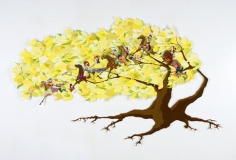 Aestheticizing the theme of battle with her colorful, highly detailed paintings of mounted warriors set within natural environments, Ruble embraces an idea articulated by Yves Klein: "As soon as there are two colors in a painting, combat begins." Using color-theory phenomena to achieve both tension and concord, Ruble also forces together Eastern and Western spatial conventions and employs compositions influenced by the disparate practices of traditional Japanese pictorial art and American post-painterly abstraction. The patterns on her warriors' costumes derive from sources including Islamic architecture, Art Nouveau designs, Chinese lattices, and 1960s op-art geometries. Each painting is meticulously cut out from the paper on which it's painted, lending the pieces subtle dimension while also calling attention to their flatness.

Neither a glorification nor a denunciation of war, these dense, spatially compressed works descend in places into a confusing cacophony of shapes, patterns, and colors, suggesting that instability and harmony are tense, interdependent components of combat, whether that combat is between figures, colors, or different visual traditions.

A second group of paintings based on Japanese crest designs abstractly depicts the moment of contact on the battlefield. Historically, Japanese crests were used during peaceful times as ornamentation for the costumes of courtiers and were later appropriated by warriors to identify opposing factions on the battlefield. For these paintings, Ruble overlapped several crests, painted in the areas of overlap, and erased the remainder of the designs to produce new geometric arrangements that combine disorder and structure in much the same fashion as the figurative works do.

The title of the exhibition is a truncation of the seventh declaration in Marinetti's 1909 Futurist manifesto, whose first line reads: "Except in struggle, there is no more beauty."

Casey Ruble completed her undergraduate studies at Smith College in 1995, and in 2002 received an MFA from Hunter College. Her work has been included in group exhibitions throughout the country as well as abroad. Ruble currently holds as artist-in-residence position at Fordham University. She presently lives and works in Red Hook, Brooklyn.