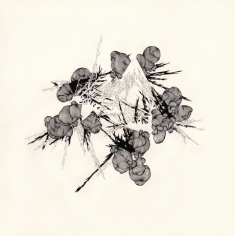 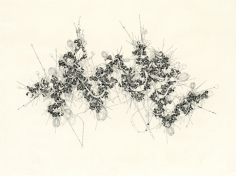 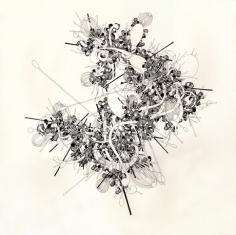 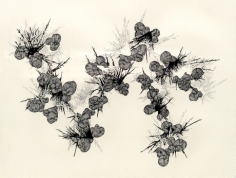 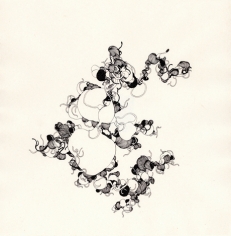 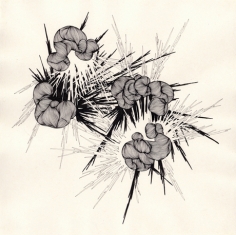 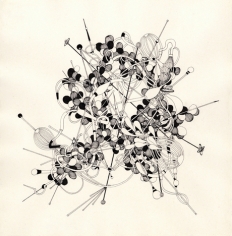 The title of Raintree’s exhibition, Operable Chambers and Other Biological Fictions, is sampled from Argentinean writer Jorge Luis Borges’ short story “The Circular Ruins,” in which Borges’ protagonist imagines and builds a man through a sequence of manic dreams. In exact anatomical detail, the dreamer’s creation appears from the inside out, his complex systems functioning as they materialize. At once, this ‘Adam’ of dreams is both a product of Borges and his nighttime visionary; their empirical knowledge of man and the wielding of their imaginations.

Works included in this exhibition are part of an ongoing investigation for Raintree considering systems of the human body and its pervasive structural complexity. Three series dominate the show: Stalls and Passages, Synapse and Sympathies and Rods and Spheres. Each can be viewed as an individual system taken out of context for the purpose of study and classification. The three series culminate in the exhibition’s central work, Excerpts from the Incredible Machine, where the taxonomy of these biological systems twist, overlap and operate as a whole.

Stalls and Passages addresses the circulation of energy and sustenance within the body; transference occurs smoothly through a network of tubes and bulbous forms, though is not fail-proof against constriction and interruption. Synapse and Sympathies focuses on communication throughout the body, the body’s absorption of information and the immediate, unconscious responses of the sympathetic nervous system. Rods and Spheres considers technological intervention, creating a hybrid of organic matter and precision engineering.

Through a process of steady observation and spontaneous invention, Raintree samples from a diverse range of scientific, art historical and literary references. Her prevailing interest in science is infused with the surreal qualities of mythology, gothic and magic realism literature along with the formal intricacy of 17th and 18th century design ornamentation. Raintree often turns to scientific biographies to capture the peculiar process of innovation and discovery. Such formal and conceptual details amass producing curious and novel inventions, dense yet delicate optic novellas.

Leah Raintree received her BFA in Painting and Art History from Virginia Commonwealth University in 2003. Her work has recently been included in the Smithsonian Institution’s Cooper Hewitt National Design Museum exhibition Rococo: the Continuing Curve, 1730 – 2008. In 2006 Raintree completed a residency at Rocky Mountain National Park and in 2007 at Big Cypress National Preserve. She currently lives and works in New York City.