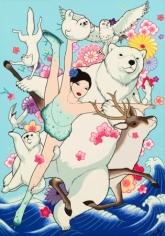 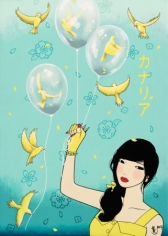 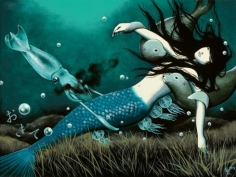 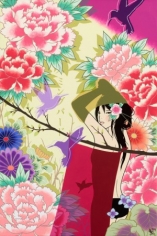 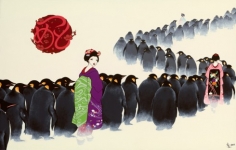 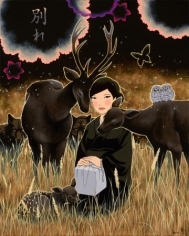 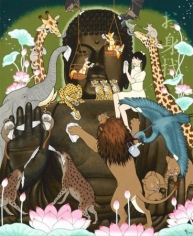 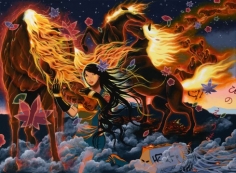 FOLEY gallery is pleased to present a solo exhibition of painter Yumiko Kayukawa.

The foreboding nature of her paintings are often masked by a playfulness and bold color strikes allowing deeper meaning through symbolism, thus revealing her underlying commentary on the environment, politics and contemporary culture.  In “Luxury Weapon,” a young “Lara Croft” like figure displays a glowing Samurai blade defending a circle of elephants and rhinoceroses, their tusks and horns glowing, alluding to the luxury bounty that attracts the vision of poachers.

In Separation, a woman dressed in a black kimono sits in a darkened field surrounded by nurturing deer.  She gently holds a wrapped box in her lap. The presence of the box and black kimono are seen as symbols of death; the black kimono is worn during the ceremony of the deceased and the box holds the ashes of cremation.  The eyes of angry wolves encroach, foreshadowing her impending violent demise.

These paintings engage with an inviting, playful and whimsical façade.   Beneath, a message is delivered, wrapped in fluid poses, enchanting figures and intricate patterns. Her use of floating motifs and Kanji (Japanese characters) throughout her paintings provides a rhythm to the narrative.

Kayukawa grew up in the small town of Naie in Hokkaido, Japan. In her pristine and natural surroundings, Kayukawa found her love of animals and nature, which later became an important theme of her work. Throughout the years, Kayukawa has found inspiration from American pop culture such as Rock & Roll, film and fashion. Kayukawa's unique style arose from the fusion of these influential sectors of American pop culture with modern and traditional Japanese motifs.

Kayukawa graduated from Bisen Art School in Sapporo, Japan and currently works and resides in Seattle, Washington.  She has shown her work extensively both nationally and abroad since her debut U.S. solo exhibition in 2001.

Year of the Fire Horse will remain on view through July 12th.  Foley Gallery is open Wednesday – Sunday, 12 – 6pm.  To request images; please contact the gallery at 212.244.9081 or info@foleygallery.com.