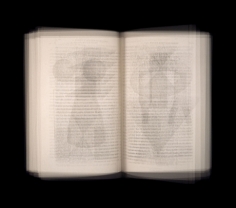 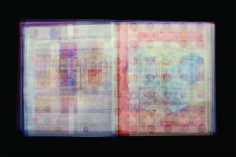 Foley Gallery is pleased to announce an exhibition of photographs by Seattle-based artist Doug Keyes.

With this new body of work Doug Keyes presents a series of luminescent and semi-figurative photographs. By layering multiple exposures on a single piece of film Keyes compresses entire books into single images. These portraits are abstract representations that visually intimate the accumulation of information over time.

The contrast between the white pages of each book set against the black background of the photographs makes each images seem to flutter like the constant turning of pages. As these haunting images are printed at the same size as their source material, they refuse sheer abstraction and retain the physical identity of books. Although no longer legible, each word and grammatical turn is still present in these new complex forms.

Doug Keyes lives and works in Seattle, Washington. He has been included in numerous group and solo exhibitions throughout the United States. In 2007, Keyes won the Project Competition Juror’s Choice Award.