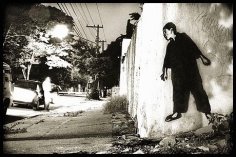 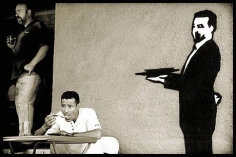 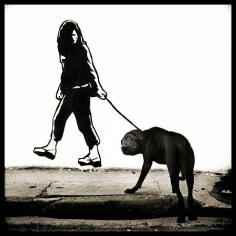 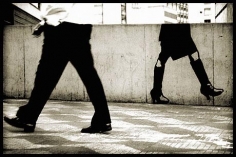 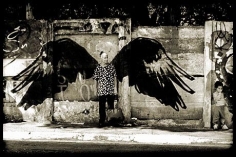 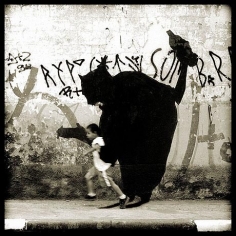 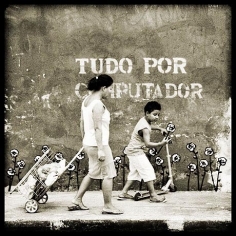 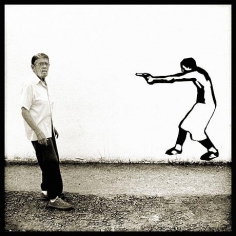 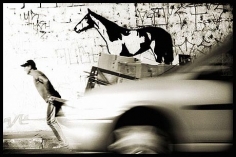 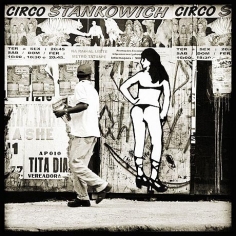 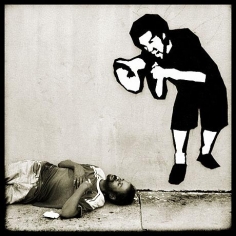 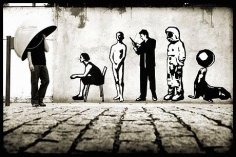 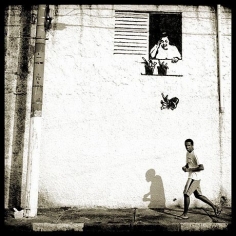 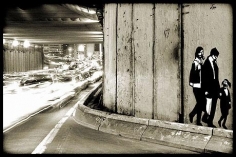 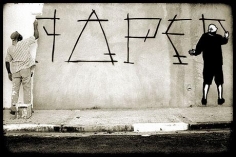 Foley Gallery is pleased to announce Metabiotics, an exhibition of new photographs and graffiti by Sao Paulo based artist Alexandre Orion.

With white latex and black spray paints in hand, Orion inscribes a Brazilian wall with some of his signature characters: an anonymous tagger, a prostitute, a flying man. Out of sight, he waits with his camera for the right moment, the right person to come into his scene. Truly unaware that they are becoming a major player on his stage, they simultaneously skirt the boundaries of installation and performance art.  Orion taps the nature of the "decisive moment" in photography to crystallize these elements that are inspired by the tensions between the two-dimensional and the three-dimensional of an over active street culture.

Orion has emerged out of the fertile graffiti culture in Brazil.  Sao Paulo is so covered with graffiti; there is barely a blank wall in the city.  In the new book, "Graffiti Brasil" (Thames & Hudson), Caleb Nealon writes that over the past decade "Sao Paulo has become the new shrine to graffiti."

Orion's work looks nothing like his American counterpar's conception of graffiti. There is no elaborate lettering or coloring. His signature is nowhere to be found.   Orion wants his graffiti to remain simple and understandable.  He comes from the Brazilian tradition of "pichaçao" (from piche, meaning tar) with its simple, bold & black line lettering. Traditional pichaçao is a kind of shout for visibility, with no ambitions of being art. It is an attempt to protest against the way Brazilians live as a third world culture, but is often seen as too aggressive and illegible. Orion is part of a new generation of graffiti artists who expand upon this notion and search for greater artistic meaning while still reflecting on cultural disparity in the metropolis.

His contemporary means of urban intervention turns the day-to-day life of passers-by into moments of unsuspecting joy, anguish, elation and danger.  The photograph is the record of the event. His graffiti acts as a backdrop for a much larger conceptual ploy, which translates into a photograph as it's resonant document.

The gallery installation will consist of large-scale black and white photographs accompanied by the graffiti that Orion uses in Brazil, setting up another opportunity for chance interaction between passer-by and graffiti.

Alexandre Orion, aged 27, was born in Sao Paulo, Brazil.  He is credited with several solo exhibitions including the Pinacoteca Do Estado in Sao Paulo, Galerie Sparts in Paris and currently at the Caixa Cultural Museum in Brasilia. Metabiotics marks his first solo exhibition in New York.

For more information or for images, please contact the gallery by phone or e-mail.