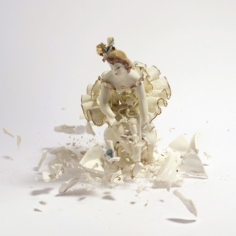 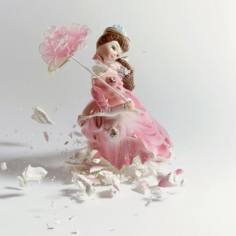 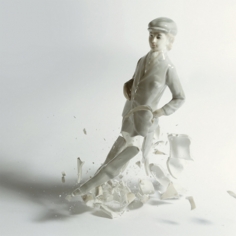 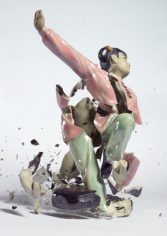 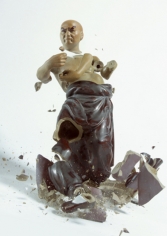 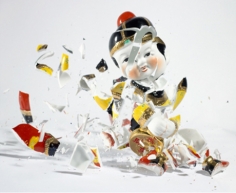 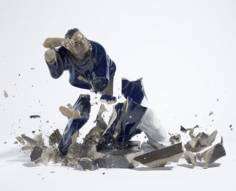 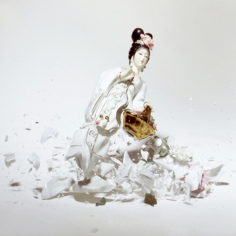 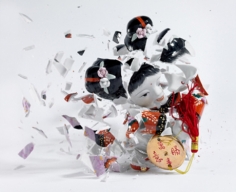 Foley Gallery is pleased to announce Temporary Sculpture, an exhibition of photographs by German artist Martin Klimas. This show marks his first exhibition in the United States.

By carefully controlling his studio environment, but leaving actions to chance, Klimas creates images that hold a moment containing the past, present and future of his subject.  We see what was known, what is now and what will become.  Yet, the moment he shares is one that we could normally not optically register.

With a strobe light and one sheet of film, Klimas captures each individual experience of porcelain figurines being dropped and obliterated. With fixed expressions, these statuettes fall to their fragile demise. But Klimas is less interested in the violence of the scene and more interested in the action as an organized narrative process that creates new informal structures.

His Photographs explore the ephemera of moments and material objects. An object that can be intact and so serene one minute can easily be destabilized and turned into an animated and fragmented entity. The figurines display a perpetual sense of motion, which in the cases of more action-oriented figures like the kung fu fighters exaggerates the action that the character is already implying. For the figures that are more passive in expression, this explosive aspect adds a disruptive quality to an otherwise staid object.

The intention of this process is the creation of an entity that is the result of the action. Every picture becomes a sculpture on its own, showing the transformation of an object that no longer exists into a stationary object that we can only, for the moment, imagine. There is a comforting idea amidst what appears to be violence and chaos, which is the concept that this destruction can ultimately result in creation.

Martin Klimas received his diploma at the Fachhochschule Dusseldorf in 2000.  His work has been exhibited gallery in galleries in Berlin, Dusseldorf and Hamburg.  This will be his first exhibition in the United States.